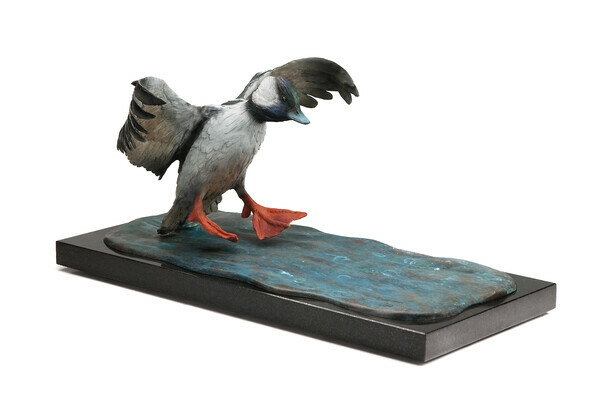 “AS THE CROW FRIES” IN THE CITY OF LANGFORD, BC 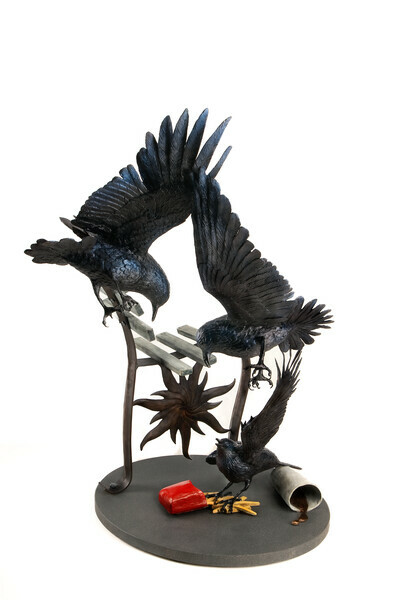 After replying to a Request for Proposal from the City of Langford, BC, I was honoured when I was told the City wished to buy and install one of my sculptures in a new public park. My work entitled “As the Crow Fries” will be installed in the new Station Park in Langford in early October.

I entered one of my bronze wildlife sculptures in a juried show being held at the ADC Art Gallery in Cincinnati, Ohio.  As it turns out, there were 3000 entries submitted for 270 spots available in the Gallery.  I was lucky enough to be one of the selected artists for their opening show.  The bronze sculpture was not large due to shipping constraints but nonetheless having my work represented by this prestigious gallery was most important for me.  The sculpture I entered was “Sweet Tooth” shown here.

Often when I am at shows someone invariably tells me they have no room in their house for a 3D work of art.  With that in mind, I created “Follow the Leader” basically as I always do…on a base horizontal on a flat surface.  However, I also considered that it could be mounted in a shadow box frame and hung on a wall.  This is a temporary hanging and not in a completed shadow box…but you get the idea. The unexpected surprise for me was how interesting the shadows became under the work, which I had never really noticed on a tabletop. 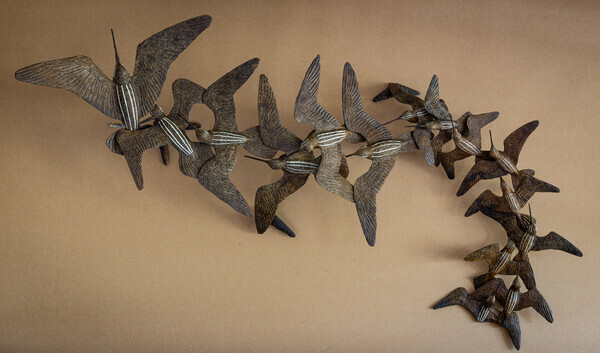 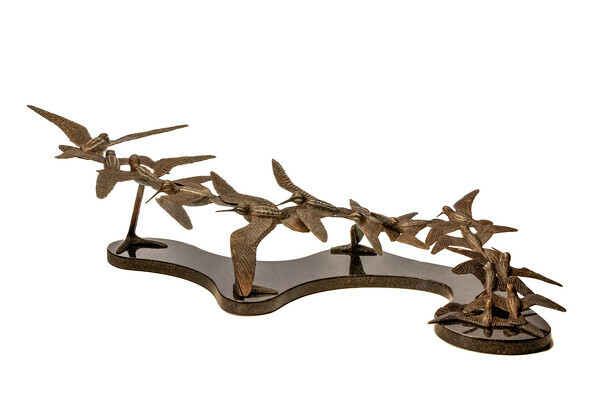 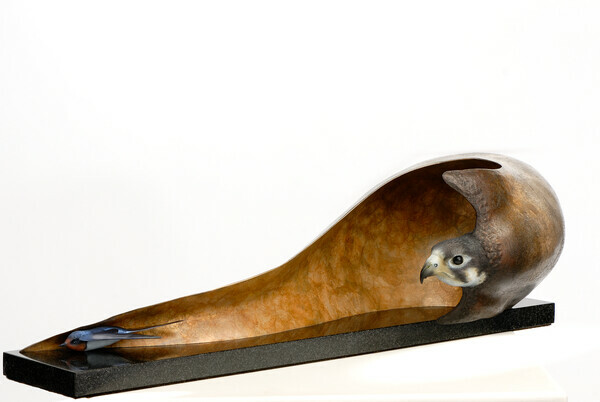 In September, during the quiet days (due to the Pandemic) I decided to enter a juried art show being conducted by the Federation of Canadian Artists in Vancouver BC.  After a few weeks of silence, I was surprised when they contacted me to tell me that not only was I juried into the show but that I had also been awarded first place.  The sculpture that I had submitted was Wing Speed.  I now have only one left in the limited edition.  I have destroyed the mold.  One of the pieces was purchased by the Prime Minister of Bahrain and presented to the King as a birthday gift. 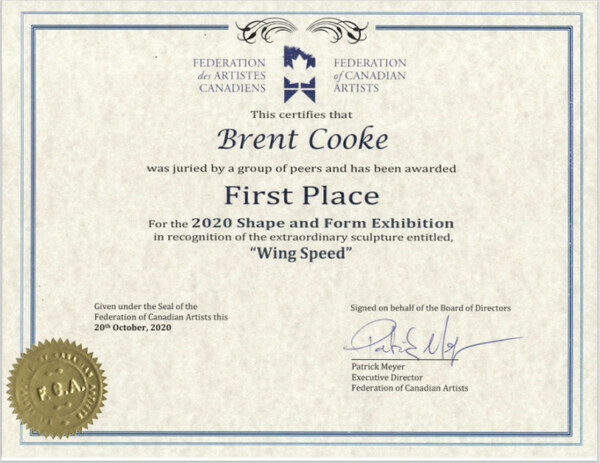 I have been working on a new sculpture during this COVID period.  It is a Barn owl standing on an old fence post.  It will be titled “Post Master” and it will be an edition of 30.  I am now finished the “roughing in” stage.  I have all the component pieces done and I am just about to start the assembly and final finishing process.  I always create all the elements of the piece individually so that I can put all the detail into areas that I can’t access once the work is one final structure.

I hope to have this piece finished in 3 weeks and then it will be just waiting until I can cross the border to take it to the foundry in Oregon and have it cast into bronze.  I will post images of the final clay model before it goes for molding.

The foundry has been running a little late due to heavy scheduling demand.  Therefore, the estimate I gave earlier regarding the new piece “Wind Riders” is off by 2 weeks.  I will be at the foundry on June 1/16 putting the finishing touches on it…pictures to follow.

BACK FROM THE FOUNDRY

I just took a new piece (Wind Riders) down to the foundry to be cast.  Wind Riders consists of 3 maple leaves blowing along in the wind.  The leaves are bronze and the wind is stainless steel.  It will be an edition of 30 and I will get a picture and all of the information up as soon as I get the first cast around mid May.

WELCOME TO THE NEW VERSION OF THE CASTART STUDIO WEBSITE

Well, it has been a long time since I last updated my website but, now the new site is up and running.  I can now post easily and update images and text quickly and offer special pricing and discounts as they become available.  Please take a moment to check out the galleries and feel free to drop me a note.  I will respond immediately. 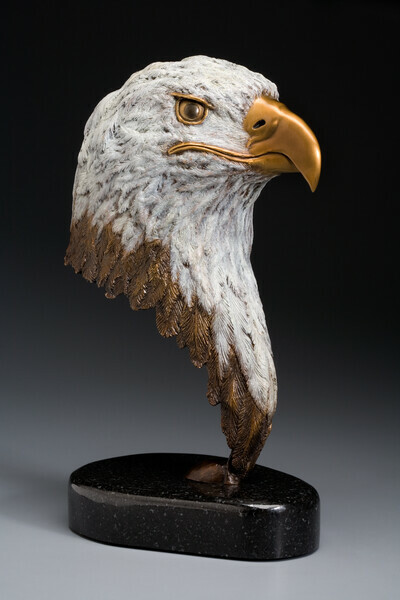 Artist Brent Cooke holds an eagle head, part of a piece he’s working on, at his Langford home studio.

It’s been a successful summer for Cooke, who won the Canadian Wildlife Federation’s Robert Bateman Award for his contributions to conservation through his artwork, and was named the Artists for Conservation’s Festival Artist Patron for 2015.
Conservation a priority for artist Brent Cooke an emerging arts luminary on the national and international scene
Rick Stiebel, News Gazette staff

What started out as a hobby in high school and a passion for preserving wildlife morphed into an award-winning calling for sculptor Brent Cooke. The Langford resident, who received a Canadian Wildlife Federation award in Ottawa recently, began carving driftwood in his teens, making many of his own tools. “The biggest problem with that is the pieces are one-offs and you’re never really able to recover the cost and the time for selling one piece at a time in that medium,” he says. That changed in 1999 when a friend suggested he look into bronze casting.

"I was instantly intrigued. Carving is art by subtraction – you start with a lump and end up with a smaller product,” says Cooke, who developed a keen interest in preserving wildlife along the way. “Working with clay is an additive process that provides a lot more leeway.”

Langford resident Brent Cooke stands amid some of his work done in his home studio. Cooke got his start as a sculpture working with driftwood but has moved on to working with bronze casting.  That process enabled him to work with thin materials that would allow for doing a sculpture of two birds in flight, for example, something he could never achieve working with wood.

Cooke starts the process for completing a bronze sculpture by creating his vision for a piece using clay. A rubber mould of the clay creation is then filled with wax and coated with a porridgelike substance that is heated and burned out, until it becomes a hard mould into which the bronze is poured.  “It’s a very expensive process,” Cooke says, adding with a laugh, “that’s why I still have my day job.” He has worked as a museum consultant since 2006, when he retired after 33 years as director of exhibits and public programs at the Royal B.C. Museum.

One of his recent consulting gigs involved designing and building a Harley-Davidson Museum on the Mainland for the legendary Trev Deeley dealership, which explains the two Harleys in the garage Cooke and his wife, Elaine, love to ride regularly.

Cooke’s love for sculpting wildlife led to his involvement with Artists for Conservation (AFC) about six years ago. The organization brings together artists in various mediums who create pieces depicting wildlife seldom viewed by the masses, such as lions on the Serengeti. About 500 artists from 27 countries participate with the organization, which holds an annual show and festival in Vancouver that includes educational art and nature programs for youth. Exhibits from the show travel to international art galleries where the pieces are sold to raise money for conservation.

“One aspect (of Artist for Conservation) that hooked me right away is all artists contribute to a conservation-based charity of their choice, and the money raised goes directly to that organization,” says Cooke, who supports the Raptor Recovery Centre in Duncan. “Many of them are tiny little places doing great work. The fact that the money helps organizations large and small is really neat.”

Cooke was “shocked and pleased” when notified earlier this summer that he had won the 2015 Canadian Wildlife Federation Robert Bateman award, given to groups or individuals who bring awareness to conservation through artistic works. He submitted for the award last year and didn’t make the cut, but the committee decided to take another look this year and the
artist couldn’t be happier.

“You don’t get into conservation for recognition, but it’s really nice when it happens,” says Cooke. “It’s special as a sculptor, considering 80 per cent of the submissions are paintings.” A Medal of Excellence and Best in Show winner at the Vancouver AFC gala in 2013, he was recently named the group’s Festival Artist Patron, following in Bateman’s shoes. Cooke has created a life-sized bronze great blue heron to be auctioned off for the cause and displayed at the AFC gala in September.

Cooke’s work is on display in galleries in Sidney, Calgary and Tulsa. For a look at some of his designs, check out castartstudio.com. More information on Artists for Conservation is a few clicks away at artistsforconservation.com.